The other day, I was thinking about presidential candidates (this being 2016) who were running despite pretty much being out of it. Sure, things can happen, but once the front runners are clear it seems like an odd existence. Governor Martin O’Malley especially stood out. The GOPs seemed miserable, admittedly for fairly solid reasons, but he seemed very positive, happy, passionate about his ideas, and.. polling at 4-5%.

There’s more to it than winning I guess, to hold any public office you always campaign, and at a certain level, you’d have to run in the firm knowledge that it’s a dry-run, but he seemed disproportionately pleased.

My son has a dog that runs around me during the day. I noticed he somehow seemed to have an odd positive association with O’Malleys name. Being a dog everything is, of course, very *very* complicated to him. Very little we do makes sense. All he has to go on, for good or bad, is tone of voice and body language – angry? sad? happy? violent? – plus the interplay with other people.

I realized if he voted, he would, without a shadow of a doubt, be for O’Malley. Ignoring plans and policy most of the others seemed angry. The rest seem at least a bit loud and irate. From a dogs POV that’s never good, bad things happen around people like that. O’Malley seems safer – no one says anything around him except sometimes “good job”. Everyone must love him. And he seems really happy! And his name sounds funny! 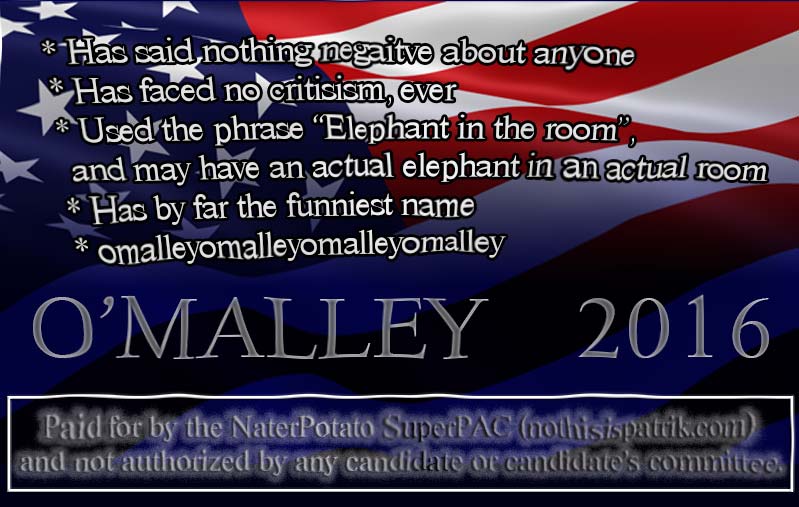 Given that I was posting it, I wondered if I was technically in violation of something. This is an election cycle after all, there are pretty strict rules about things. I’m not doing much, but enough to need a privacy policy, so who knows. So I check the Federal Election Commissions page, and no, within fair use it’s all good. Surprisingly though, it’s even more solidly locked in (including taking donations and using them, regardless of if the candidate(s) would approve) if I act as a political action committe (PAC). That sounds like a lot of work, but actually unless turn over $1k or more, I don’t even need to file a statement of formation. In fact, they didn’t want my statement of formation. Not that I tried that hard, might try to eFile. So thus formed the NaterPotato SuperPAC. Welcome. O’Malley has suspended his campain, so for them moment we’re mostly in a holding pattern, but we retain the right to further campaign later if we feel like it and see something appropriate.