If you’re a bit like me, you may have wondered how Christmas (or any strands) of light are actually connected. I’ve sort of half figured it’s probably super obvious if I decided to actually look at them or take a few measurements, sometimes looked briefly at the mess of wires and realized that it’s not totally obvious from the outside, but I’ll look at it later sometime. Well, today was sometime – playing with microcontrollers I’ve used LEDs from a few strands I got last year after the season (they’re often $1.5-$2/50, or 3-4 cents/LED). So before messing up another one, I looked more carefully.

Here they are after untwisting, untangling and generally wrangling all the wire into straight(ish) lines, then re-bunching lengths of wire and lengths of straight lights (light wired to light, no extra wires). Clearer? Well, since it’s still not 100% obvious, here’s some labels.

The lights by the green arrows with three wires going into them are probably the least clear part. It’s worth noticing (because it looked odd unraveled) that the two center lengths (cyan arrows) of wire are between two piles of half the lights, as though they were several feet apart rather than end-to-end as they originally appeared. First a peek at the three-wire thing. 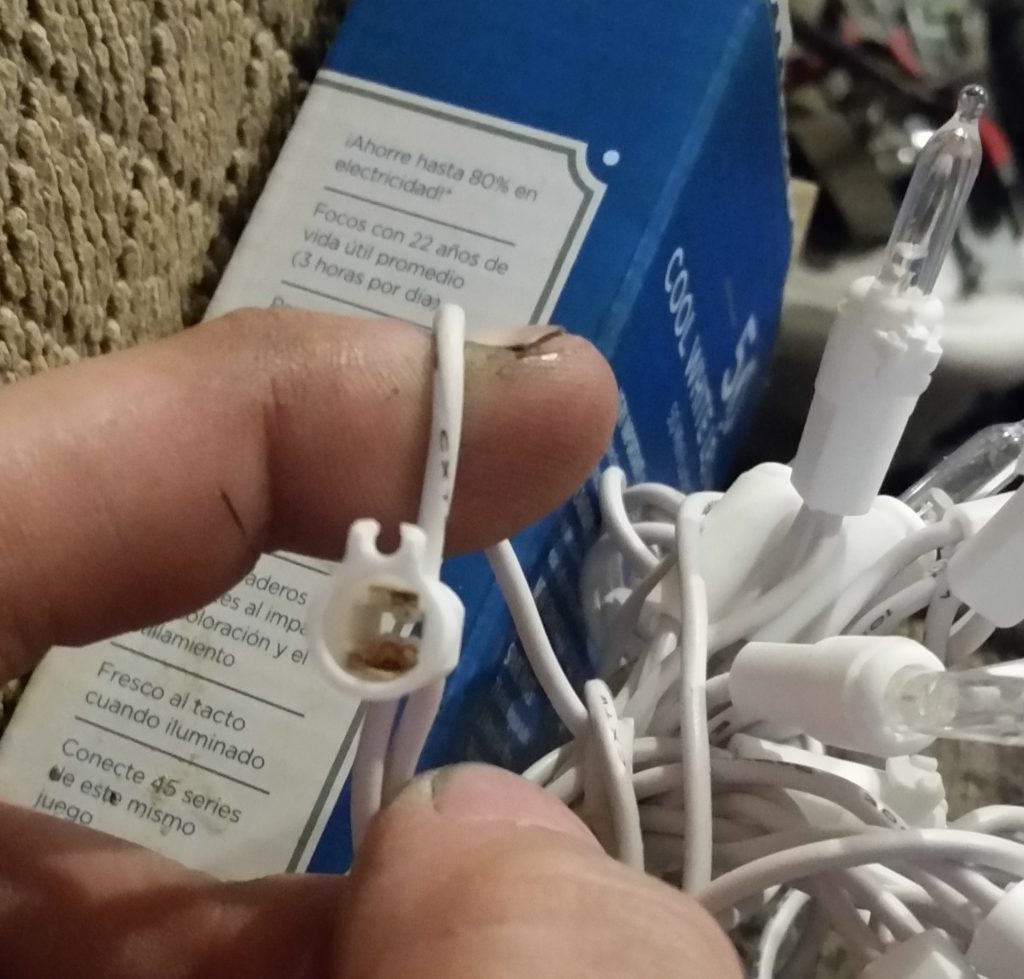 Without the bulb, it’s pretty easy to see that two of the wires are just connected. It’s a T junction with and LED in on the part heading off toward the rest of the lights. This is the case on all four of them. 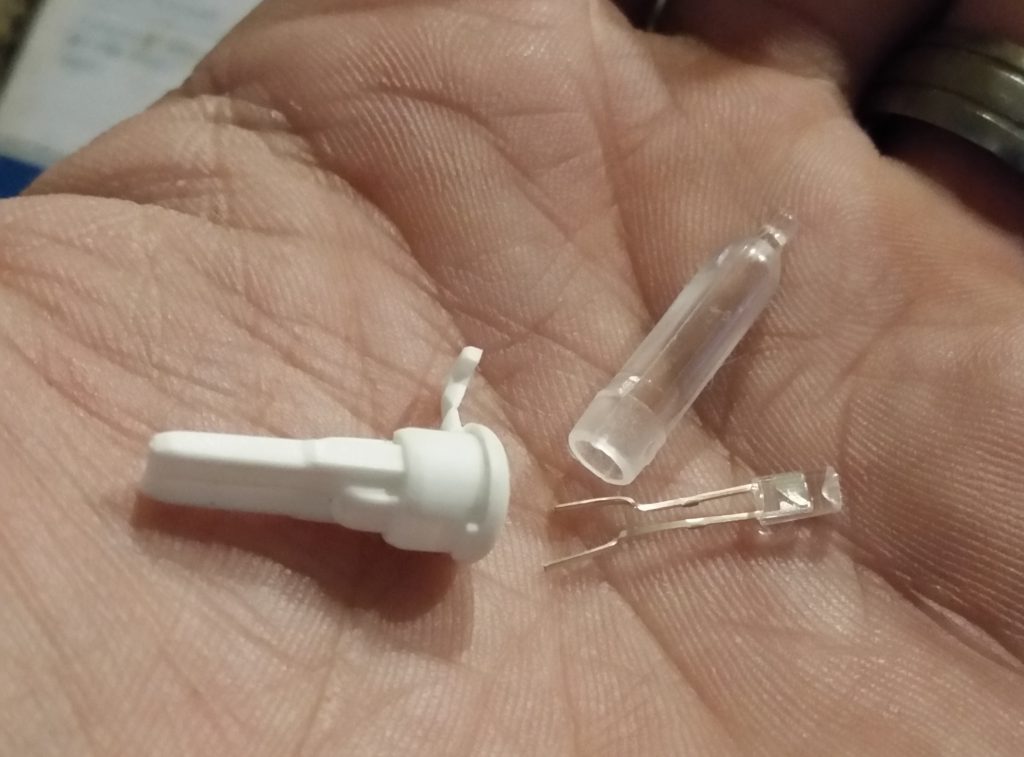 As an aside, this is what’s inside the removed bulb, after unbending the legs and pulling out the bulb. It’s, well, and LED. Little dip on top to diffuse it, then a bigger diffuser over that to make it look more like a “normal” bulb, and a little socket to connect the whole thing. The legs are longer on one side to signify polarity (just like normal LEDs bought as components).

So simplifying the 3-wire-lights and drawing the wires as wires, it’ll look like this. The power is connected straight through (potentially to more strands) and in between there are two sets of 25 LEDs connected. Each side is connected in the opposite direction. This is how a normally direct current low voltage LED can run off 110v alternating current straight from the grid. Since there’s 25 of them, they experience a 110/25 = 4.4v drop each, which is fairly appropriate. There are resistors on the legs of a few to cut back on the current (didn’t get a picture, sorry). Those look slightly randomly inserted (soldered onto one of the legs of a bulb) which kinda of makes sense I guess – doesn’t matter where as long as it’s somewhere in each bunch. Since they’re light emitting diodesÂ they only allow current in one direction, so when the AC is turned the other direction, they’re not conducting (or lighting up).

During that phase, the ones in the opposite direction come on instead, then after 1/60th of a second it switches. For a while in between, both are dark. It’s all so fast that I could probably just pretend it’s not noticeable, but actually if you look at them, they actually flicker pretty obviously. If you move a bulb rapidly through the air in front of you so that you see a streak of light, you’ll notice that it’s not actually a streak, it’s a dotted line as it goes on/off while you move it. If you hold one from each bunch next to each other and do the same, you can see that each line is “there” at opposite times, like -_-_-_-_. I tried to get some pictures, but persistence of vision phenomena like that (similar to a tv screen) doesn’t really show up well on camera, especially not one ones without a shutter speed setting..

Â  So what about the lengths of wire? Well, here they are drawn closer to scale/position. As you can see, if we require the power in and out at the ends (rather than the center) we do need another wire going forward, meaning we have to match the length once just to have our ground/zero/cathode to connect it to, and then, as they block opposite-direction flow, also an open vcc/power/anode too to connect the other bunch. in circuit, that means there will be four “spans” of wire, and two are indeed between the lights.

That’s about all of it. In short, yes, it was a pretty trivial circuit once unraveled and looked at. But if you wanted to see without the hassle of untangling one, there you go. Now on to seeing what would be the most reasonable way to individually control them.