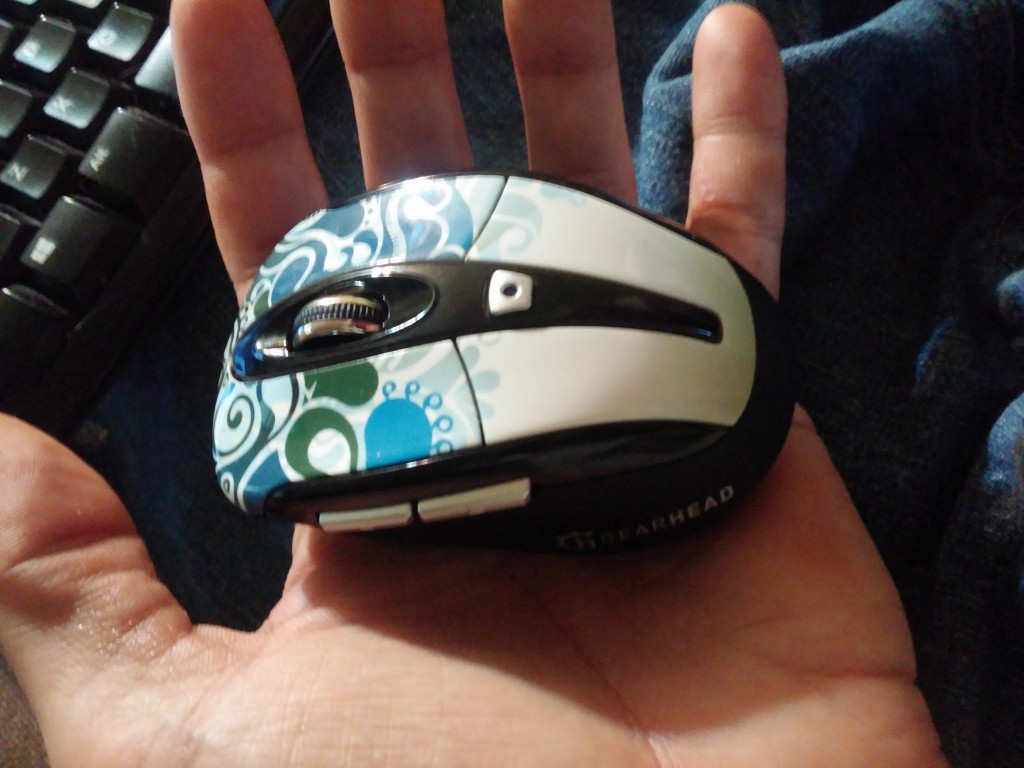 Last time I spoke of this.. this.. IO/UI situation dilemma thing.. I’d just decided against rebuying an identical Logitech k400R (Keyboard with built in touchpad where the nubmer pad usually is, 90% sized, physical mouse buttons, extra top-left buttons, whatever we’re now supposed to say instead of retarded media key config). Reason: cursor keys and the whole right hand ctrl-alt-shift situation is pretty bad, and it’s a little small (touchpad in particular). Picky? Yes. Insanely. But really, six months in (incidentally also when the space bar collapsed from use, but really I’d be prepared to live with that – I crammed a lot of brutal use into those months), if I’m not used to pressing ‘>’ without hitting Enter or rctrl-rshift without getting the arrow keys involved, it’s probably not happening – sorry.

Thus, I tried Microsofts very similar ™ multimedia keyboard, which looked better. Yeah, yeah, keep it up with the hyena laugh – obviously I should have seen this red flags (like “Microsoft”). But I used their ergo keyboard (with a serial touchpad play-doe:ed to the center thumb section) for like a decade. They make good UI sometimes. This, however, isn’t it. Arrows.. a little nicer, but not enough. Touchpad – *no physical buttons*. *Horror* to drag/drop/select with. Some kind of odd tactile move thing instead, which sucked. And then it had max two multitouch with no gestures! Good thinkin’ MS – redefine the entire UI so it’s like a cell phone (very impractical) and rely on absolute position and gesture/touch combos, then release one of the few modern touchpads without that particular feature.. It could have *maybe* worked, but then.. no insert and delete keys. It’s over. I get it, people don’t use it. Programmers do, ctrl-ins, shift-ins, ctrl-del.. You can get used to left-backspace, but not everything uses the unix-y ctri-x-v-c-a-e-k stuff. So.. it gets to be a media keyboard. Some, because no one likes it.

Then (calm down, you’re nearly up to speed) I switched to a plain Logitech k270 keyboard/mouse combo. With a logitech T650 superhuge touchpad on the side. Same no-button woes, but at least it’s big. The keyboard is a keyboard (by which I mean plain AT 102 key, normal size, normal places). So basically I retreated, and the “side touch pad” really mostly became “remote for when I ‘m not typing” with the little wireless mouse that came with it for those “quick-click/swipe, back to typing”. It’s ok. But!

It only has one two buttons and a scroll wheel. Low dpi. Tiny (but that’s kinda good). However, my 17 button Razer Naga is too big (rocks for gaming, but a little touchy unless it’s photoshop, and I use a drawing tablet for that). There. You’re up to date! You probably quit reading already! You bastard! Ok, not really. But anyhow, this GearHead fixed that. Standard 5 (left, right, forward, backward, fifth) plus a scroll wheel with center click *and* side pan (pan right/left by tilting). It dpes 1200 or 800 dpi, 28 inches/s tracking speed (i.e. even turned down you can corner to corner a rather large mousepad in <1s without losing precision). It's $15, which is suspiciously cheap. So it covers my gripes nicely, it's slightly bigger and it's even kind of artsy with the prints. So, is it all that? The holy grail? The end to my bitchy moans about my UI devices? Well, no. But first the good news - all that stuff it says it does.. it actually does. None of it feels "pasted on" so to speak, you can count it and it's all there. That's kind of unusual in this field, usually at least one or two of the brag-points are just that, there to brag about but has some boneheaded bug or config flaw that makes them totally useless in actual use. I just didn't get that vibe. It even came with a fairly good config manager, able to swap up to five profiles with arbitrary macros. It doesn't seem to do per-app, which kind of would have been nice but frankly I didn't even expect this much configurability so I'm prepared to not be too picky about it. The bad news, well, this isn't a gaming spec mouse. I'm ok with that, I don't game much and when I do I use a Naga. Being smaller, easier to handle and cordless is worth it for "work mouse". But if you want One True Mouse to go with your gamer laptop, you might have some issues. The speed is way beyond what you need for desktop, but in a shooter it's so-so. Same with DPI. The macro stuff is actually about the same as Razers, but theirs suck (for a $80 top of the line piece of equipment) so you'll still be running 3rd party (if legal) or be annoyed. Same there - w/e to me, but worth noting. Some of the extra buttons are *very* hard to hit and hit correctly. Especially pan left/right and the fifth. This could be in part because my hands are ~20% upscaled, so "normal human sized" hardware is already a bit fiddly to me, and super portable stuff is worse. But I think the pan especially is a real issue - laggy response, easy to scroll instead of tip, tip when you scroll, etc. I tried setting it to [ and ] in one of the profiles (for use in photoshop as toolsize +/-) and it was a travesty. Scrolling in the browser kinda sorta works, but really you'll be wanting to press a modifier key and scroll instead. It's ok for "another button", but it's not really very comfy for panning. Other than that, this is really quite nice! It's a lot like the logitech cheapo-came-with-k230 mouse, but with more buttons, better precision and back/forward side buttons (very handy on the web). It's a way good deal at $15. All told, I ain't even mad. If that doesn't sound like a glowing review, consider my prior attempts to buy IO devices.. Oh, and it has it's own proprietary receiver. That's a Bad Thing in a sense, but not really their fault. There's only one "maybe" standard, bluetooth, and except the newest versions it's too powerhungry and so expensive it's not exactly the "USB without wires" it was once billed as. Logitech has a "unifying" receiver, which unifies a select few logitech products (the t650 and k400r being the only ones I've seen - the k230 and mouse and the other three logitech mice I've had all have their own, each incompatible with the others) and they'll let no one else in. Kind of understandable (though still dumb - it's not like anyone much is going to compromise their IO preferences over a usb port) but annoying. Microsoft followed suite, which is wrong on way many levels - they're in the OS business, which is to say the standards business. They're probably the only company (possibly besides Apple, but they'll never be compatible with anything but apple if they can help it) that has so much weight that they really could have said "Oh yeah, win 8 we're pushing this standard for wireless IO @2.4GHz. Free to good home - we'er hoping it'll be the new "keyboard/mouse/touch" port for desktop/laptop/tablet/phone" and most likely get it shoved in the majority of computers (not machines, because they lose at phones/tabs, but w/e) with the rest using a single dongle. It wouldn't take much for it to go industry-wide - the "proprietary" ones are for the most part really a single transmitter chip anyhow, someone just needs to lay down a unified protocol and not charge a good foot and half up the ass to use it like bluetooth does. But.. they didn't. So GearHead.. also didn't. But they couldn't, and didn't expect them to. So ok, perhaps some other time.