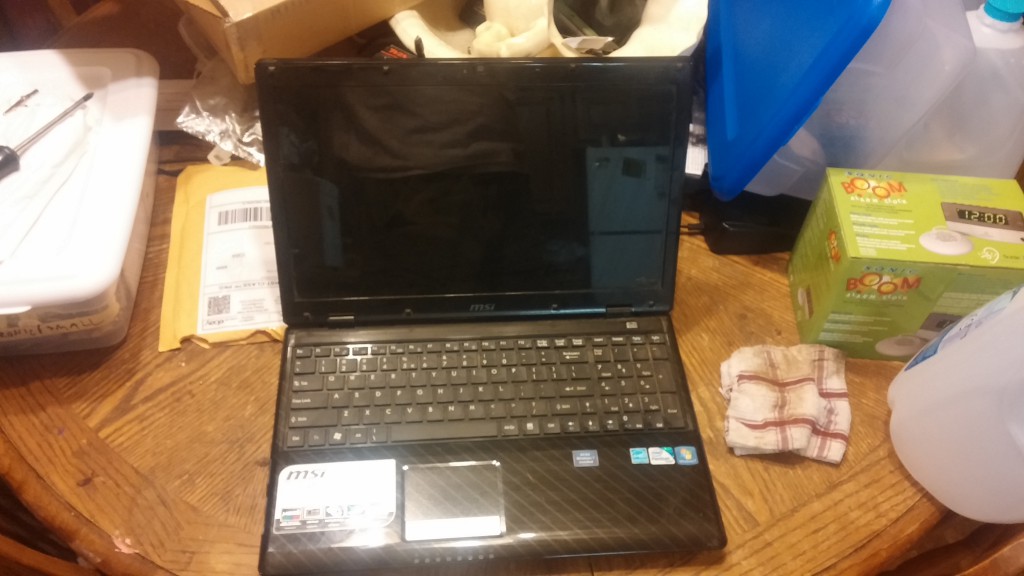 A friend of mine called the other week excited to have gotten a new laptop. Rightfully so, it was one of the new MSIs that run internal GeForce and one of the newer i-cores – looks awesome. With any luck the trend of giving more of the heat dispersal/power consumption (which is really the upper bound in laptops) cake to gpus will continue as more software gets on board with parallelizing things that really don’t have to be done one at a time, even “normal” people stuff. Looking at the internals (on the web – different continent) it was surprisingly close to my several years old workhorse, an MSI a6200-462US (sometimes called cr620 internationally, MS-1681 if you ask the bios, and possibly other things as well). I peeked, slightly hopeful, into if there’s any easier way to run better graphics chips in them now. There isn’t (no surprise), could still cram an extrenal desktop geforce into an enclosure and run it over PCIe-1x on a riser cable into the on-board WiFi card slot or the external expresscard slot (currently a USB3 port) but that’s kind of pricey and tricky modding for something not too terribly functional or portable. But reading about it, I looked a bit at the cpu again.

If you look into putting a beefier CPU into a laptop, you’ll find thousands of message board posts where the first guy says “Could I..?” and four – fifty two saying “No. NO! And even if you could it would be a bad idea and totally not worth it”. I realized that I’d seen nothing much to back that up besides sheer number and volume. So I persisted a little more this time and actually found two (yes, a whopping two) people saying “I did that”. One didn’t elaborate much, the other offered two screenshots of the before/after cpuz and a few pics of the inside saying it worked fine.

Looking even more carefully at mine, which has an Intel P6100 (Intel HD gpu on same socket, 35W total 25 CPU 12.5 GPU) there were even versions of the same laptop running i3 and i5. In theory the motherboard should even be cool with 1st gen i7, though perhaps not so much the bios. So.. started dreaming small – i3-370m. 2.4 GHz instead of 2 even, hyperthreading to four threads, kick passmark up to around 2000 (from 1380, like 45% gain). Power consumption and heat profile identical. The entire laptop, including power supply and bios, has been sold with it already in it. I can’t think of a reason other than cost this shouldn’t work. So that must be what they’re all backing off for, I figure – if it costs as much as a similar laptop (aging but functional), it won’t work. Look it up on eBay and… $4.83. Buy-it-now, with shipping included. You’re totally kidding me. *That* is the “OMGWTFBBQ SOHARD WONTWORK” folks are bitching about? The price of a cheeseburger and eight screws? It’s on. 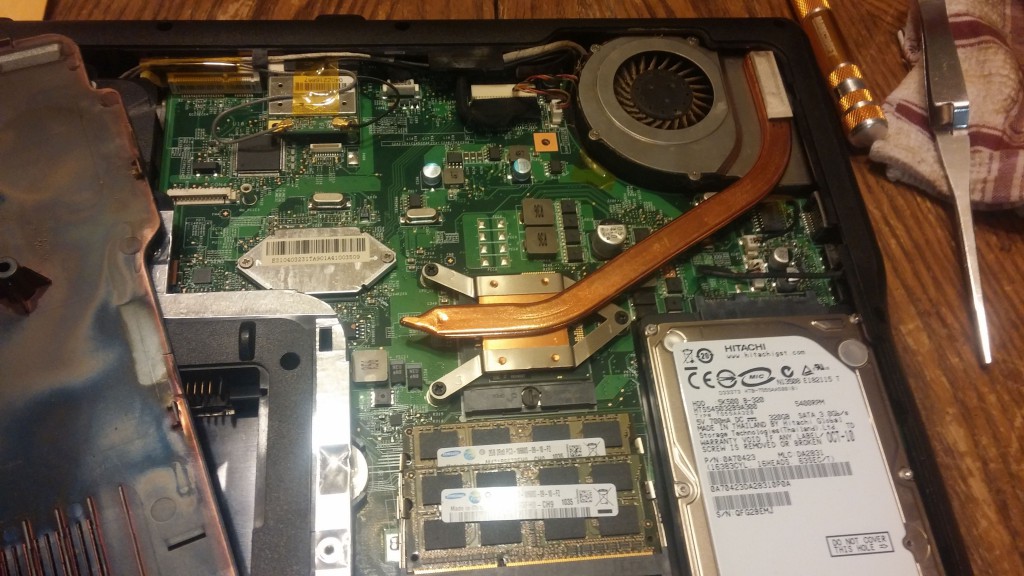 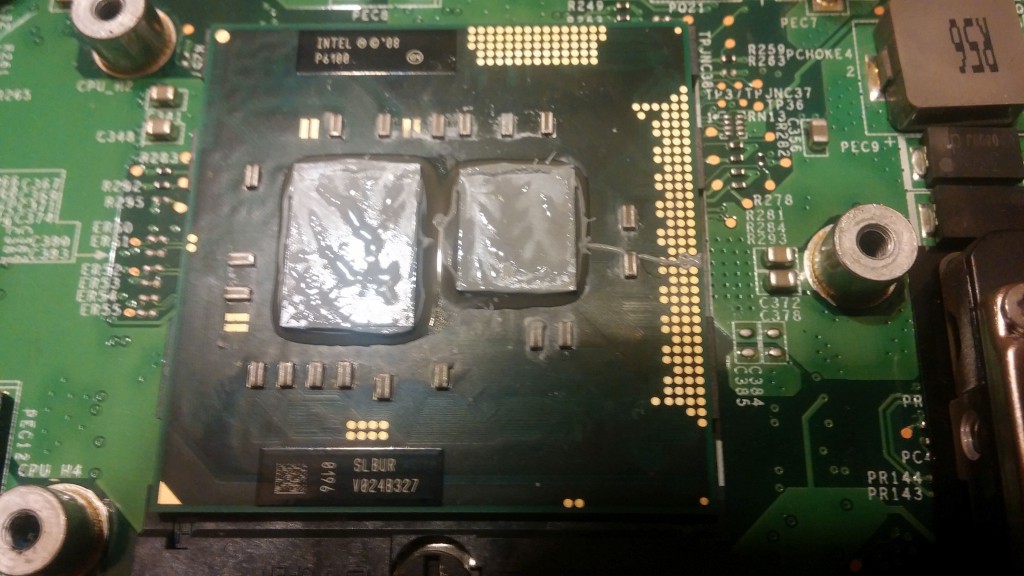 I look some more and settle on an i5-540M instead – $20 (again, with shipping) and same profile otherwise. It’s the upper end of things and going much newer it’ll be more like $50-$100 – not bad but a lot to lose if I toast it in three seconds and gain nothing (at $20 I can eat that no problem). It arrives and I open it up. It all goes extremely smoothly. Open the back, off with the cpu shield, turn the ZIF, cpu goes out, cpu goes in. Tighten ZIF, dab o’ thermal grease, everything back on again. Took perhaps 20 min and that’s because I took the time to clean the fan out since it’s already apart (and can’t be done without putting on new thermal compound, so I don’t that often). Turning it on, it was in fact running a little hotter until I had a magic dejavu moment from the last time I cleaned the fan – that time, and this time, I forgot to plug that fan back in. Quick bottom off, plug in, bottom on and it was all better. 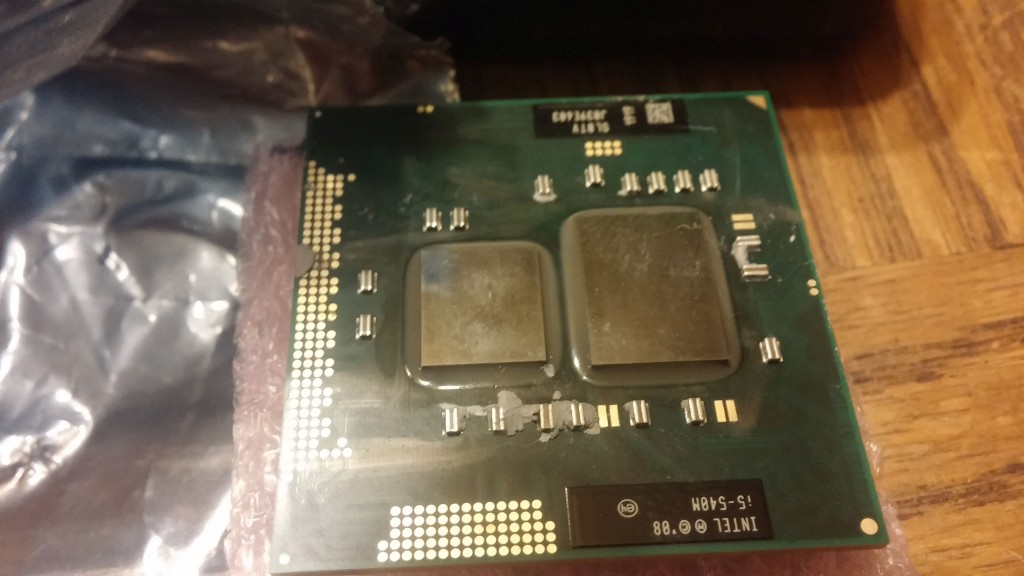 Been running it a day and works fine. Running a full load with IntelBurnTest the temps go up to the 80s after a few minutes, possibly a little faster than the old cpu (less than a minute diff) but that’s really going a little over spec anyway – as you may have seen last paragraph a 25W cpu and 12.5W gpu doesn’t in fact add up to the 35W the cooler/power supply is rated for – and not terribly unreasonable. Stuff that used to put in the red doesn’t at all now though. What used to be 100% all-cores load is not like 60% chilling along at 40-45 C. I’ve literally ran jobs that formerly required underclocking it slightly (locking it to 1.7 GHz) or taking breaks without even having the fan turn on. Running passmark it benches 2800, almost exactly twice twice the former 1390. 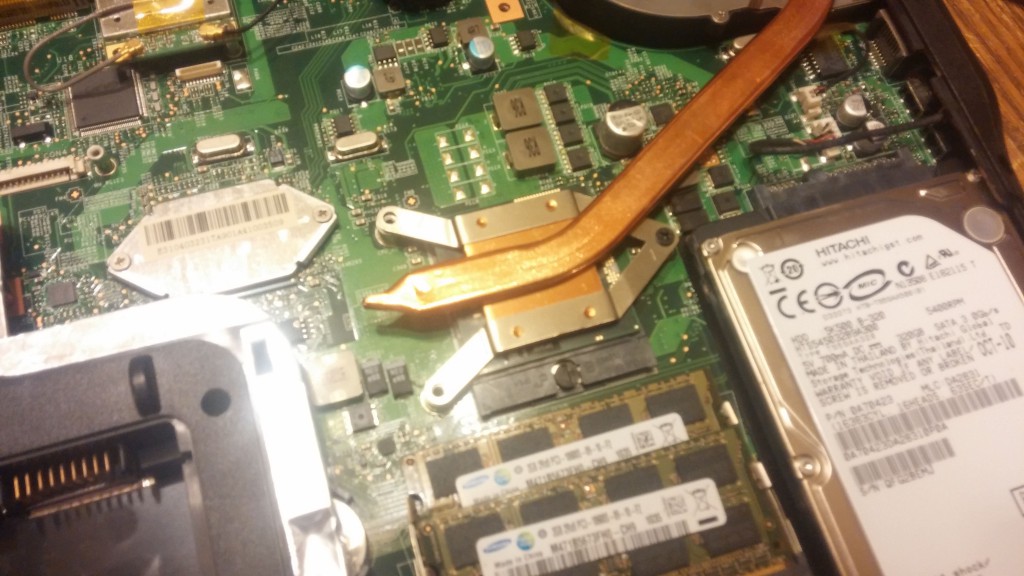 So.. I guess if you hear a lot about how worthless it is to put in a fresh CPU in an older laptop, it might very well not be. Make sure it’s built for it and works with what you get and don’t break the bank hoping to make it super modern, but making it “best in it’s class two-three years ago” is totally doable. This one is now a little unbalanced, the built in disk is a bit slow and 4 Gb RAM is kind of tight, bottoming out the RAM to 8 Gb and putting a solid-state in the cd-bay for the OS would even it out and boost it a lot but those are $60-$120 jobs (each) while this was the cheapest and simplest improvement I’ve made to this laptop so far. I’m thinking it might last a little longer yet, supposing it doesn’t go so long that what people will give you for free if the screen is smashed or the CPU fried is better. 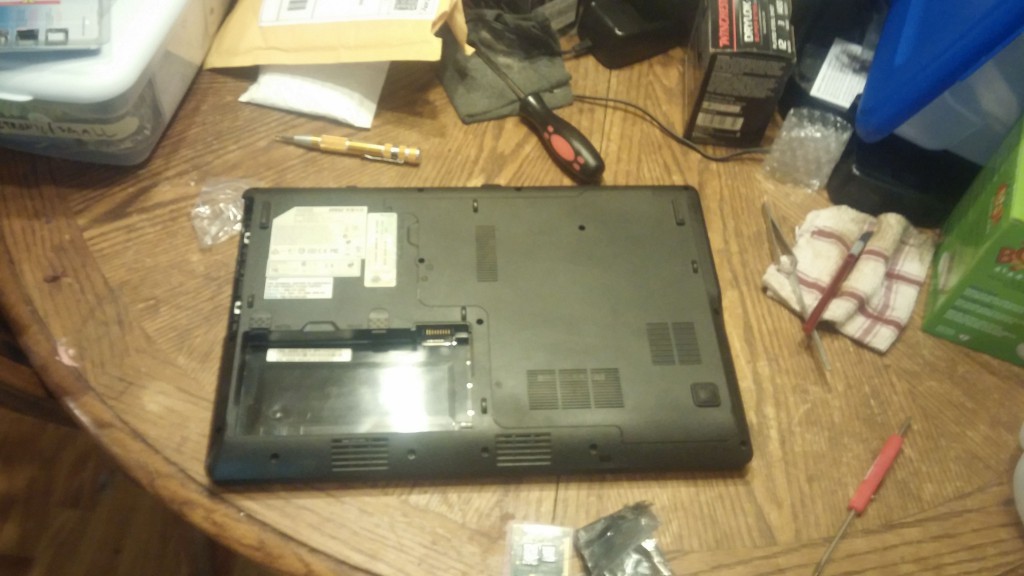 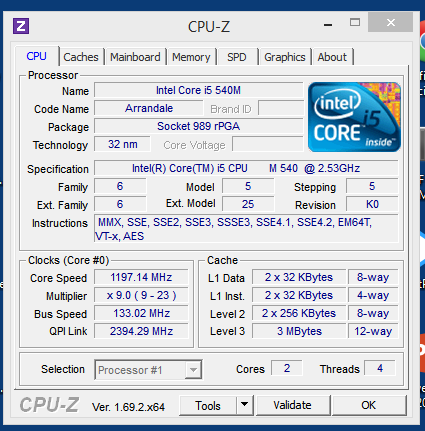