Been off for a bit as my youngest daughter wanted to learn to play minecraft. A few weeks ago. I’ve been carefully avoiding knowing almost anything about the game, since I know I’m exactly the kind of person who’ll immediately and obsessively get stuck on stuff like that. But she asked so nicely and the “Oh daddy, can’t we try just a little heroin?” got me. We played the xbox 360 version a little, then moved to the android handheld and day three the private server was up on the LAN. I’m starting to wrestle partially lose. Anyway.. 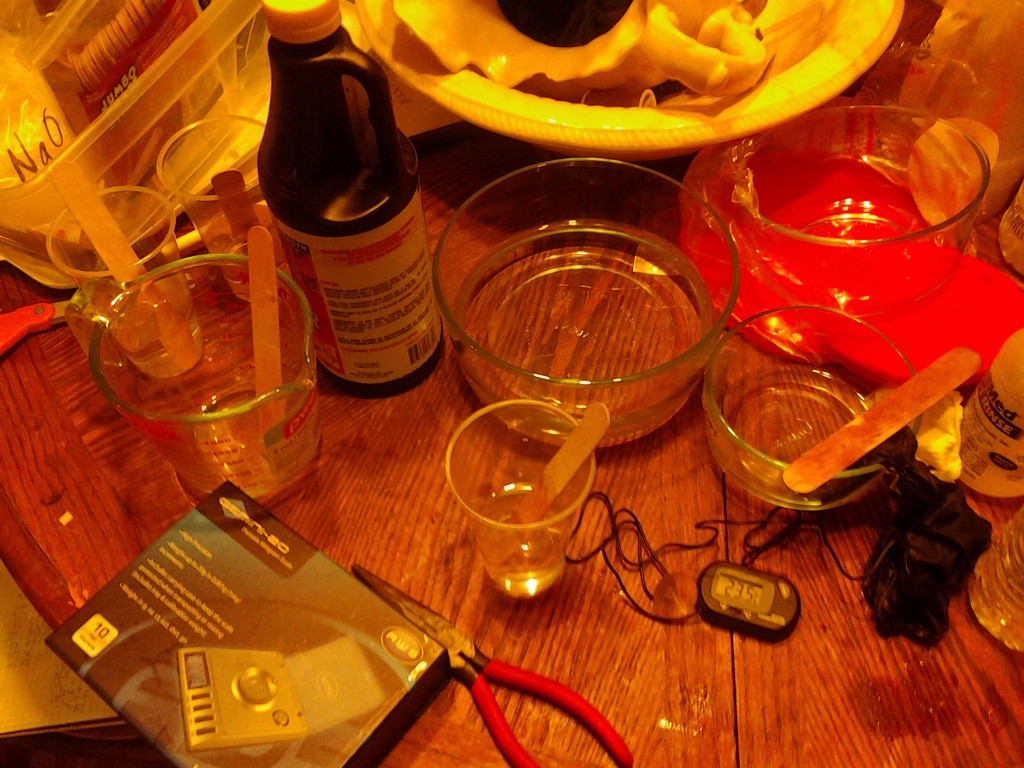 The fourth of July is approaching and I’m considering perhaps making something go boom (nitrocellulose or so, low explosives, under the limits, not transported – I’m old enough to have to be law abiding). So since buying nitric acid is kind of a no-no and I don’t really feel up to making/distilling some from H2SO4 and nitrate salts with just kitchen gear, I figured perhaps just a salt/acid bath. Worked for the alchemists, right? So digging through the supplies, I have pretty much everything, only the sulfuric acid is the hardware store kind I bought to open a drain with (it’s excellent for that btw, liquefies hair, dust, pretty much anything organic in a flash). So I don’t really know how concentrated it is. If it’s less than 90ish%, I should probably evaporate off some of the water. Or it could be in the lower range (20-30% like battery acid) and not even be worth it, but then it seems stronger when it reacts.

Looking around I found a few articles, most suggesting either weighing a set amount of it and checking it’s density or reacting it with a base until neutral to find out the molar amount of H2SO4 per liter or kilo and then counting backwards from that. I had some sodium hydroxide, i.e. lye. It’s fairly pure (99+%) from a lab place, though really red devil lye is about the same within a few percent so that should work too. So I decided on the latter. Marz Kreations had a very nice and long writeup with all the details and example math to explain exactly what you’re doing, but I’m going to instead write a very brief one similar to what is now jotted in my notebook. Totally feel free to understand it, but I want at least a summary I could later do again without having to think through what I did.

Besides H2SO4 and NaOH (sulfuric acid and lye) you’ll also need some containers that do not react with the acid or lye. Preferably glass, but a lot of plastics work pretty ok too as long as it’s not taking too long. Test them somewhere you don’t mind them melting and perhaps look up the recycle code (that little triangle arrow thing has a number in the center saying what kind of plastic you’re looking at if you google it). Also, a scale (here a 0.001 g precision 0-20 g scale) – they’re available on amazon and for some reason many smoke shops along with those odd shaped water pipes and herbal grinders.. You’ll also want some glass rods to stir with and some pH checking papers or additives that change color with the acidity. I choose to pretend wooden craft sticks are glassish as they don’t react *that* fast with the chemicals and had some pH strips laying around from some other time. Orderable on amazon or chemical supply places or kids science education places, or in a pinch you could use some red cabbage juice (it’s really pretty good and easy to get, I just didn’t have to). You should also use eye protection and wear gloves. Doesn’t show here, but I’m wearing goggles and nitrile, both from the hardware store.

There’s also a thermometer (for aquariums, few bucks on amazon sometime) with the probe stuck inside a small amount of liquid inside a nitrile glove finger. That’s not really needed, but I wanted to practice using it on something safe to see how awkward it was. Acid and base will heat up a bit when mixed and shouldn’t be mixed too fast or in too high concentrations, but there’s no real risk here as long as you take it slow and dilute which you’ll have to anyway. Still, feel free to practice. Also involved is a stuff to measure small amounts (mL or less) of liquid. I’m using a syringe (sans needle – nothing here is metal compatible) from an inkjet refill kit and a few pipettes from a beauty store (I think they’re for measuring hair dye products or something, but are handy chemical resistant 0-3 mL things).

So, off to the races:

4. Put 20 mL of solution B into three separate containers. Or five if you wish I suppose, the more the merrier, but perhaps start of with three and see if everything is consistent after that.

5. Pull up some of solution A (I did 10 mL at a time in the printer refill syringe) and put it in one of the solution B containers. You’ll be doing this until the solution is neutral, so don’t overshoot, but right at first you can go pretty fast especially if the pH remains low.

6. Stir the solution and test the pH. Write down how much A you added and what the pH is. Or don’t and just keep track of total solution A added, but you’ll (ok, I’ll) probably mess that up so just log it.

7. Repeat 5 and 6, adding less and less solution A each time as the pH gets closer to 7 (neutral). Keep careful track of how much total you’ve put in.

8. Once neutral (or really overshoot it a bit so you feel confident you’re correct, but count when it was “most neutral” – the sort of middle between your additions. Write that down separately.

9. Do all that again for the other two solution B 20 mL pieces you separated.

10. Take the average of your three samples – add up how much total solution A you added to all three to get them to neutral and divide that by three.

11. Divide that average by four. This is how many mmol of H2SO4 there is an liter of your original acid.