Decided to mess with a kind of old laptop a bit a few days ago. It seemed to boot and wasn’t that bad, some kind of amd dual core + NVIDA onboard. Was hoping to play with OpenCL or at least have something capable of running it and also perhaps use it for an HDMI out to the TV (youtube, netflix, etc). Perhaps run folding@home in it’s spare time. The cooling was busted though. Did the usual and took it apart, cleaned the fan and replaced the paste on CPU/GPU. 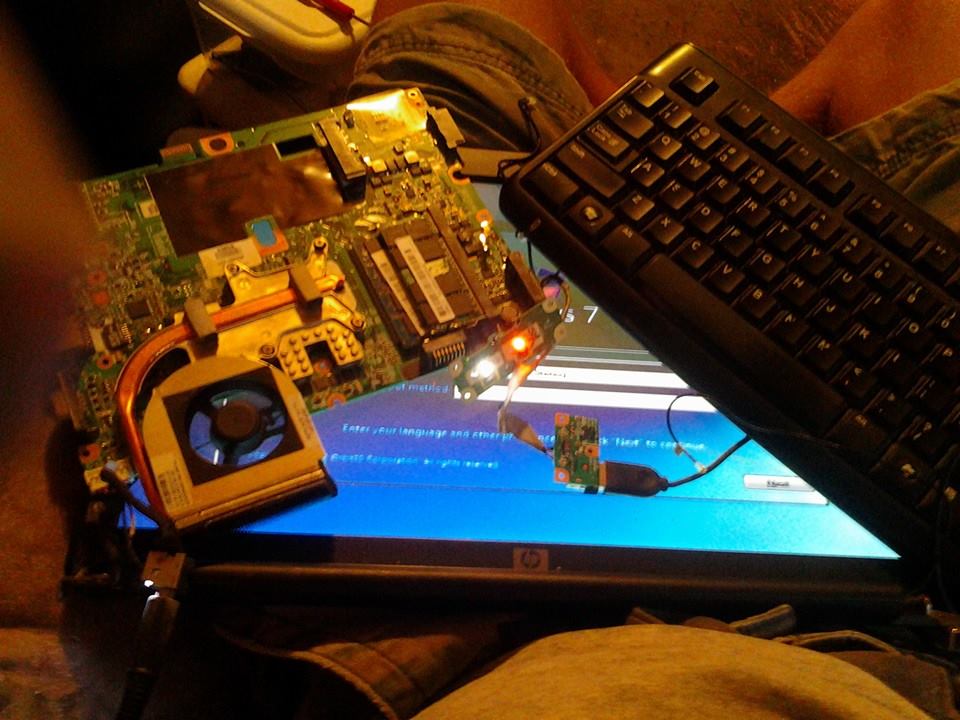 Here it is running win 7 install off a flash drive. As you can (probably) see, it has very little connected, just an USB kbd and the screen. Still overheated. Taking the actual fan out of the metal piece with the grill revealed another chunk of dust. Removed that, better, but still can’t even get through installing windows or linux, it’ll run ten-fifteen minutes. Tried adding some more copper to the conductor from an old sheet of craft stuff (bought a roll of copper for something I never did some other time).

Today MS decided to push an update first thing this morning tying up my computer so I decided to rip apart an old ice maker that broke last year. I was planning on salvaging some copper coil and perhaps a fan to build a better heat conductor/disperser (while it was still on my lap in the last picture and thus technically a lap top, I’m not really aiming to have it become mobile again). Figured there’d be other cool things in it too and there was (a water pump, some various mounts, a few switches an relays that look alive).

Out of curiosity I tried plugging it in, which did nothing. Since I had it open (very very open, with half thrown out) I decided to also just hook the compressor to 110v and see if at least it worked. It did! 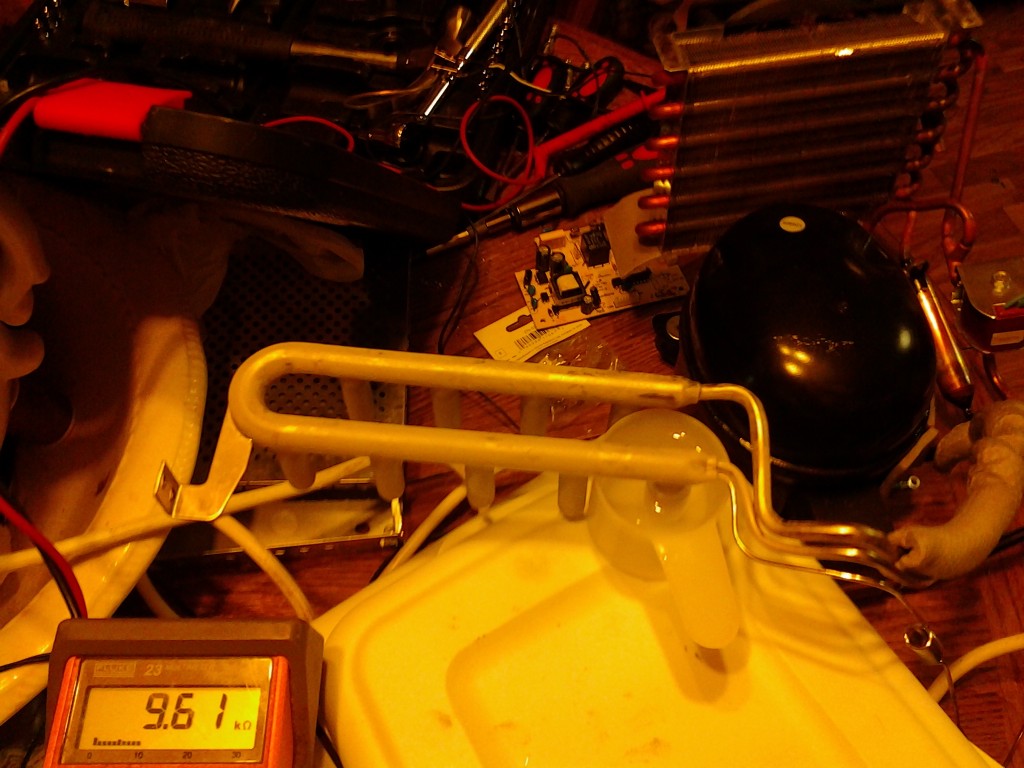 Here it is freezing a single ice cube. The evap coil (top right) has a thermoresistor on it that starts at around 13 kohm and drops to about 8 kohm while running the compressor, then kind of inches back up again (I guess that means the compressor is just keeping the pressure, not making more). Unplugged it rises slowly again. The very thin line keeps puffing R134a into the evap coil, freezing it. Another coil can be activated (again, by hooking it to 110v) to equalize the whole thin, dumping the built-up pressure on the condensor coil side into the evap coil. This flash heats it briefly, in it’s former life melting a thin layer of the ice frozen onto it and dropping the ice cube.

Not sure if it’d survive very long since it’s probably not made for continuous cycle, but I could probably hook something to it to shut the compressor at 9 kohm or so and go back on at 12 kohm or so. Or perhaps just run it in timed cycles. Haven’t decided. Either way, I almost have to try to hook this to the laptop either directly or via a water mover. I don’t think I’ve seen a full r134a active cooling system before (though I’m sure they exist), usually next step up is peltier elements. If it works, well, that should take care of the overheating and if the CPU/GPU are cooperative I could probably overclock/overvolt it pretty massively. At a 50W premium, granted, but still..